Two energy scholars who have studied the extent of methane leaks in the oil and gas industry explain what rescinding methane emissions regulations will mean to the climate and industry.

The EPA on Aug. 29 unveiled a proposal to rescind regulations to limit methane emissions from the oil and gas industry. Critics said the rollback will worsen climate change and air quality. Reaction from energy companies varied, with some arguing the limits are unnecessary while others supported the federal regulations.

Colorado State University energy scholars Anthony Marchese and Dan Zimmerle last year published an extensive study on the extent of methane emissions from the oil and gas industry. They explain the sources of methane from natural gas and what this regulatory rollback could mean.

1. Once natural gas is extracted from the ground, how do the methane and other gases get into the atmosphere?

The U.S. natural gas infrastructure includes a million miles of pipes and millions of valves, fittings, tanks, compressors and other components that operate 24 hours per day, 7 days per week, to deliver natural gas to your home. Natural gas can travel over 1,000 miles from the well to end use. During that long journey, gas has many opportunities to escape into the atmosphere. This includes unwanted leaks from faulty components as well as intentional venting of gas from devices that use the high-pressure gas to open and close valves. 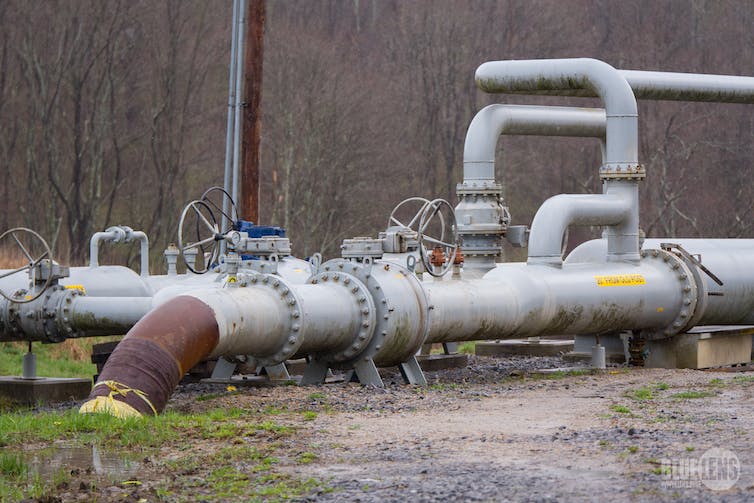 The natural gas delivery infrastructure, which includes pipelines and valves and compressors, has many opportunities to leak methane, the main component of natural gas. Mark Dixon/flickr, CC BY

In addition, the compressors that are required to increase the pressure and pump the gas through the network are powered by internal combustion engines that burn natural gas; the exhaust of those engines includes unburned methane. Since the natural gas delivered to your home is 85% to 95% methane, natural gas leaks are predominantly methane. While methane poses the greatest threat to the climate because of its greenhouse gas potency, the other hydrocarbons present in the natural gas can degrade regional air quality and harm human health.

2. Why has it been difficult to determine the extent, or the rate, of methane emissions?

Because the natural gas infrastructure is so vast, it is not possible to measure every leak from every faulty valve or fitting. Indeed, we don’t even have accurate estimates of the total number of valves and fittings. The best way to estimate the total amount of methane emissions from the natural gas infrastructure is to perform as many measurements as possible from as many different types of components as possible. The reason that one has to perform hundreds or even thousands of measurements from each type of equipment is so that you can capture the high-emitting sources (the so-called super-emitters), which are low in number but their emissions are so high that they can account for 50% to 80% of the total emissions. 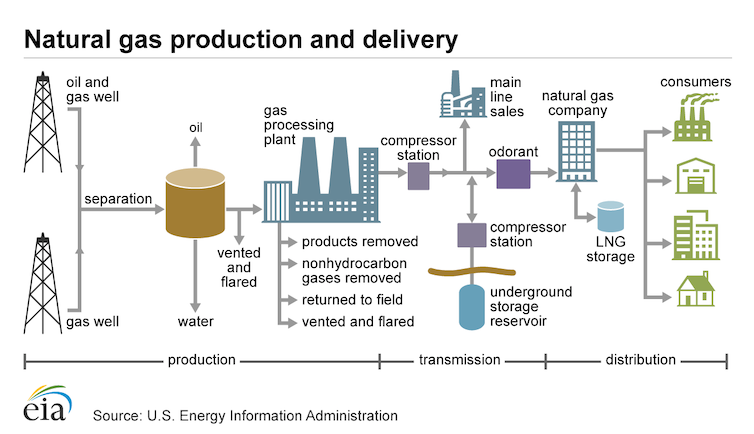 Natural gas from wells could travel thousands of miles through many types of infrastructure before reaching consumers. Energy Information Administration, CC BY

By making thousands of measurements, along with compiling our best estimates of the inventory of all of the types of equipment in the U.S. natural gas infrastructure, it is possible to estimate the total emissions from all U.S. natural gas operations with a reasonable degree of certainty, which we currently estimate to be 2.3%. That is, 2.3% of the natural gas that travels through pipelines is released into the air. We estimate that quantity of natural gas emissions represents a loss in revenue of over US$1 billion per year for the industry, and it has the equivalent greenhouse gas impact as the annual tailpipe emissions from 70 million passenger cars.

3. What would the Obama-era regulations have required oil and gas companies to do?

The Obama-era regulations were put in place in 2016 to set emissions limits for methane from a variety of sources in the oil and gas industry. The 2016 regulations built upon previous regulations put in place in 2012 for emissions of volatile organic hydrocarbons (VOCs), which are nonmethane hydrocarbon gases produced by oil and gas operations. The companies that had installed controls for VOC emissions sources were not required to install any new controls because reduction in VOC emissions also reduce methane emissions.

The 2016 rule also included additional sources that were not previously covered in 2012, including hydraulically fractured oil wells, some of which can contain a large amount of gas along with oil; pneumatic devices at well sites and gas processing plants; and compressors and pneumatic controllers at transmission and storage facilities.

The 2016 rule required operators to periodically detect and repair methane leaks at new and modified facilities; older facilities that have not been significantly modified are not covered by the rule.

4. How do scientists determine whether natural gas is better for climate change than burning coal?

Methane is a highly potent greenhouse gas, with more than 80 times the climate warming impact of carbon dioxide over the first 20 years after it is released. Studies show that if methane leaked at a rate of greater than 3%, there would be no immediate climate benefits from retiring coal-fired power plants in favor of natural gas power plants. The good news is that a 2.3% leak rate suggests that natural gas power plants are slightly more beneficial to the climate in comparison to coal-fired power plants. However, the results of our studies also showed that power plants could show more substantial benefit to the climate if the industry reduced the total methane leakage rate to 1%, which many of our industry partners believe to be achievable.

5. Why were some oil and gas companies supportive of the tighter regulations on methane emissions?

The EPA estimates that the proposed new amendments would save the oil and gas industry $17 to $19 million per year. While this may sound like a lot of money, it pales in comparison to the economic value to be gained by minimizing leakage. We estimate that reducing methane emissions from 2.3% to 1% would result in an annual revenue of over a half billion dollars per year, which is more than 30 times the estimated savings from rolling back the regulations. Many oil and gas companies recognize this fact, and they also recognize that regulations are needed to ensure that all companies are held to the same standard.

Our experience working closely with over 20 industry partners has shown that industry can provide leadership in sharing best operational practices, developing comprehensive leak detection and repair programs, piloting these new technologies and constructively engaging with the regulatory process. Our experience in Colorado, which has developed some of the nation’s strictest methane emissions regulations, also strongly suggests that government regulations are needed to ensure that best practices become standard practices.

In the end, we believe the Trump administration’s efforts to roll back regulations, without regard to their efficacy, not only will worsen climate change but also will affect the health and safety of U.S. citizens and undercut the natural gas industry’s efforts to produce and promote natural gas as a clean fossil fuel – a fossil fuel that integrates well with renewable sources.

[ Deep knowledge, daily. Sign up for The Conversation’s newsletter. ]

Celebrating the Hubble telescope: 30 years of photos from space