US economy teetering as pandemic inflicts damage; plus the virus numbers you need to know 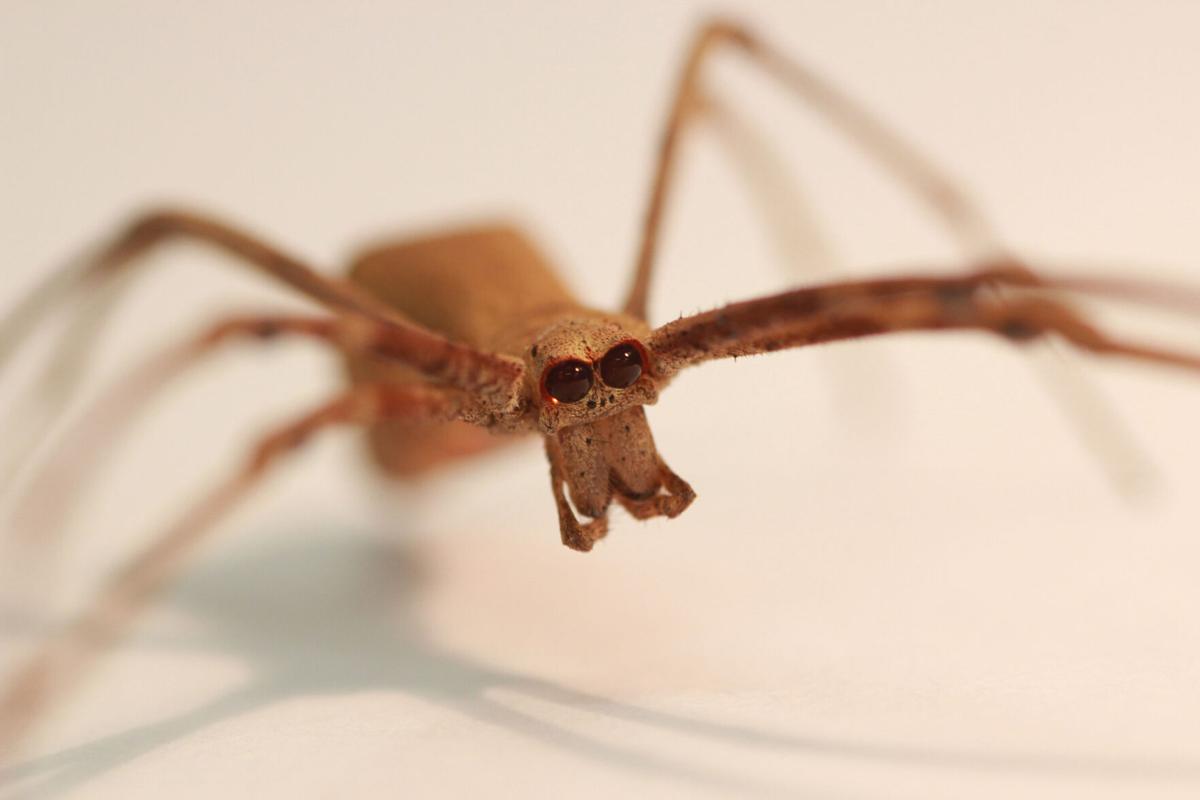 Ogre-faced spiders can hear both low frequency and high frequency sounds, according to new research. 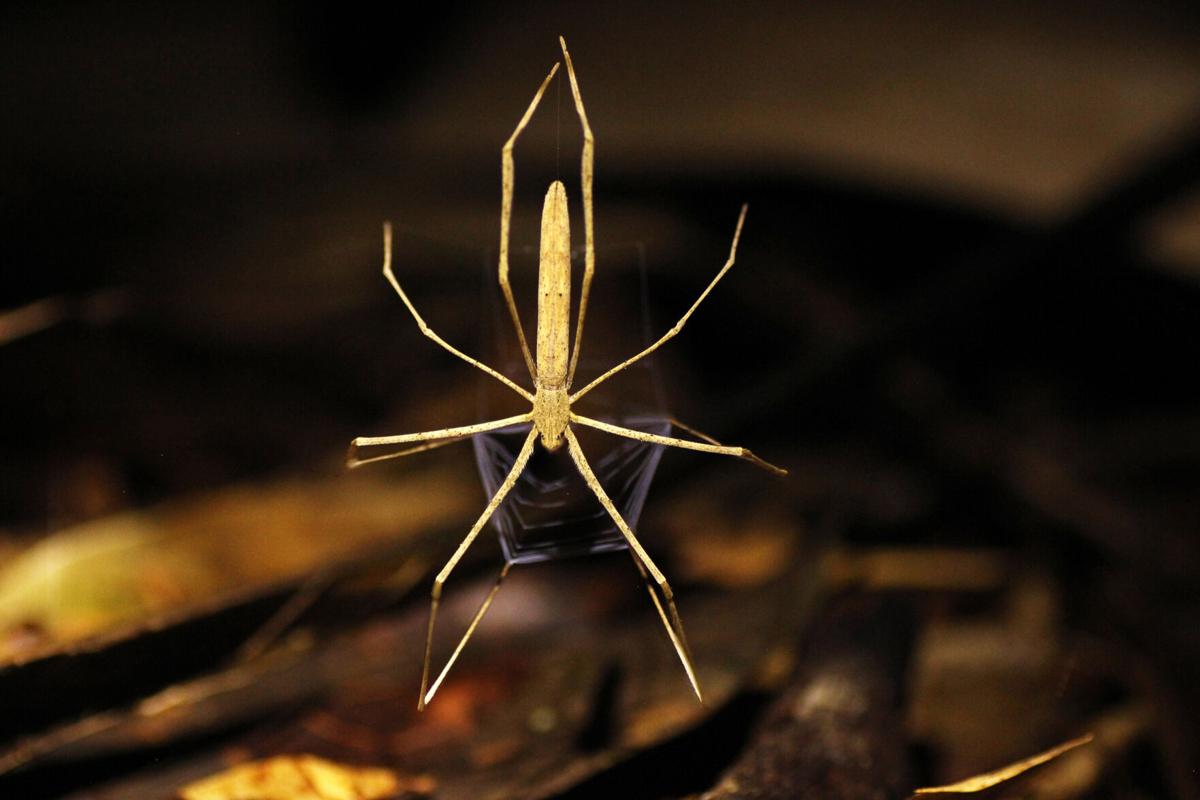 The ogre-faced spider uses its developed sense of sight and hearing to actively hunt and capture prey.

Spooky season is here — so let's talk about spiders.

Ogre-faced spiders are believed to have the largest eyes of all known spider species, and they are known for their reported ability to see in the dark 2,000 times better than humans. That formidable eyesight, however, is just one of the sensory tools these arachnids can use when they hunt for food, a new study has revealed.

Using receptors on their legs, these spiders can detect sounds from at least 6.5 feet from the source, and are sensitive to frequencies up to 10 kilohertz, the research team said.

Through laboratory tests and observations in the field, the scientists showed that auditory stimuli in the same low frequency range as the wing beats of moths, mosquitoes and flies prompted the spiders to perform a "backward strike," one of their signature hunting moves.

This, according to the researchers, showed that the spiders use auditory cues to detect and capture flying prey.

"These spiders are a gold mine of information that have just gone untapped for a really long time," said study coauthor Jay Stafstrom, a postdoctoral researcher in neurobiology and behavior at Cornell University.

"The visual capabilities that they possess are off the map, and now, showing they can hear quite well, I think there's a lot more to understand about them going on in the future."

Ogre-faced spiders are tropical critters found all over the world, including in the U.S., where they are present in Southern states like Florida.

You are unlikely to have noticed them in your backyard though, as they spend the day hours camouflaging as plant fronds, and only become active at night.

"The metaphor is Jekyll and Hyde," senior study author Ronald Hoy, a professor of neurobiology and behavior at Cornell, told CNN.

Unlike other spiders that build a web that captures their food, ogre-faced spiders are net casters and hunt in a more active, rather dramatic fashion.

They build an A-shaped frame web from which they dangle upside down at night, and use a net they hold with their legs to trap prey when it's within reach.

The two hunting methods rely on different senses, he explained.

"It seems to be that there's this nice partition of sensory systems where they are depending on vision to catch things off the ground specifically, and their ability to hear allows them to catch things out of the air."

Spiders don't have ears, but ogre-faced spiders are able to listen to sounds through receptors on their legs, including leg hairs, according to the researchers.

Ogre-faced spiders reacted differently to sounds depending on their frequency, the study showed.

They would perform a "backward strike" to hunt for food in response to low frequency sounds in the same range as the wing beats of animals they prey upon. But when they heard high frequency sounds matching the range of bird calls, the spiders didn't move.

This doesn't mean the spiders couldn't hear sounds at high frequencies — lab experiments the scientists conducted to monitor the spiders' brain activity in response to sounds confirmed they could, in fact, hear them.

Rather, the scientists suspect the spiders might ignore these sounds in self-defense, something they are looking to investigate further in the future.

"We know that birds eat a lot of spiders. I've seen a lot of birds in the palms that these spiders are in, and they happen to chirp in these high frequency ranges that these spiders can detect. So it might be an early warning sign that, OK, something might be coming to eat me soon," Stafstrom said.

Monitoring the spiders' response to auditory stimuli through nanotechnology electrodes inserted in their brains and legs, as the researchers did, is no easy feat.

The process of inserting electrodes into a spider's brain without killing it requires highly skilled prep work and "a watchmaker's hand," Hoy said.

He credited study coauthor Gil Menda, a postdoctoral fellow at Cornell's department of neurobiology and behavior, with this special talent.

Developing a method to record brain activity in spiders, Roy explained, allowed the Cornell research team over time to show convincingly that spiders are not just sensitive to vibrations, but also to sound from a distant source.

Looking for spiders in their natural habitat

The researchers also conducted observations in the field, studying the spiders' behavior in their natural habitat.

Hanging out with nocturnal spiders in their habitat is not the most comfortable experience, but Stafstrom does it with a passion.

For this study, he spent a week in the woods in Gainesville, Florida, equipped with a headlight, a Bluetooth speaker to play sounds for the spiders through his smartphone, and a camera to film their reactions.

Stafstrom gained experience camping with the spiders throughout his studies.

As a doctoral student at the University of Nebraska - Lincoln, "I was down in Florida by myself, in a tent, for two months, in the middle of summer. It was rough, my sleeping schedule was very weird, but it's definitely the best way to study these spiders," he said.

During a different field mission in Costa Rica, Stafstrom was actually bitten by an ogre-faced spider.

"I might have the world record of the only person to have ever been bitten by these spiders," Stafstrom said.

The bite was harmless, he said — just itchy for some time.

There is still so much we don't know about spiders, and that's a gap we need to fill, according to Hoy and Stafstrom.

Studying how spiders and other small animals are able to see and hear can further new discoveries and nanotechnology applications, the researchers argued.

"If we can figure out the equipment they are using, and how they are processing information, we should be able to translate that through biomimicry into better bio-sensors, better directional microphones, or visual processing algorithms," Stafstrom said.

"The point is any understudied, underappreciated group has fascinating lives, even a yucky spider, and we can learn something from it," Hoy added.

RELATED: It's National Cat Day: Celebrate with these 20 photos

Texas girl and her cat

Island of the Cats

Your Friday morning headlines: A lookahead to the day's events on the campaign trail; Zeta's destruction across the South; today's forecast, birthdays and more.

50 photos that show companionship in the animal kingdom

The bee population is dying. Researchers have created first global map of the species to save them.