During its harrowing descent to the surface of Mars last Thursday, NASA's Perseverance rover captured video that the agency is calling "How to Land on Mars." The video, along with other newly released footage, gives earthlings back home a better sense of the sights and sounds on the red planet.

Cameras on "Percy," as the rover is affectionately called at mission control, show for the first time the perspective of a spacecraft landing on Mars. The video begins 230 seconds after the rover entered the Martian atmosphere, with the inflation of the rover's parachute 7 miles above the Martian surface, and ends with the rover touching down on the surface.

The Perseverance rover Twitter account shared the view: "Your front-row seat to my Mars landing is here. Watch how we did it."

The first audio of Mars was also picked up briefly by a microphone on the rover, which captured a few seconds of a Martian breeze and sounds of the rover operating once it reached the surface.

However, the microphone did not capture any "usable data" of the descent itself — but it did survive the process.

The rover Twitter account also shared the sounds: "Now that you've seen Mars, hear it. Grab some headphones and listen to the first sounds captured by one of my microphones."

"This video of Perseverance's descent is the closest you can get to landing on Mars without putting on a pressure suit," said Thomas Zurbuchen, associate administrator for NASA's Science Mission Directorate, in a statement.

"It should become mandatory viewing for young women and men who not only want to explore other worlds and build the spacecraft that will take them there, but also want to be part of the diverse teams achieving all the audacious goals in our future."

While previous spacecraft have sent back "movies," which are really just images stitched together in GIF form, Perseverance has cameras with video capability. Altogether, the rover has 23 cameras, which include zooming and color capabilities as well.

The rover and its attached helicopter, called Ingenuity, landed on Mars Thursday.

After landing, the rover relayed back data and images using NASA's Mars Reconnaissance Orbiter, which has been circling the planet since 2006.

The first black-and-white images of the rover's landing site were available almost immediately. Last Friday, the first color images were shared. The rover also sent back a never-before-seen view: What it looks like to land on Mars. This image is one still from the video that was shared Monday.

"For those who wonder how you land on Mars — or why it is so difficult — or how cool it would be to do so — you need look no further," said acting NASA Administrator Steve Jurczyk in a statement.

"Perseverance is just getting started, and already has provided some of the most iconic visuals in space exploration history. It reinforces the remarkable level of engineering and precision that is required to build and fly a vehicle to the Red Planet."

Engineers refer to landing on the surface of Mars as the "seven minutes of terror." The rover plummets down through the thin Martian atmosphere and lands itself, with no assistance from NASA, during this time due to a one-way 11-minute delay.

"Now we finally have a front-row view to what we call 'the seven minutes of terror' while landing on Mars," said Michael Watkins, director of NASA's Jet Propulsion Laboratory in Pasadena, California, in a statement. "From the explosive opening of the parachute to the landing rockets' plume sending dust and debris flying at touchdown, it's absolutely awe-inspiring."

In the video, a bevy of intriguing moments can be witnessed from the landing, something only ever seen from animations previously.

The video shows the heat shield dropping away, the gentle sway of the rover from the descent stage, the Martian surface as it comes into sharp detail, the swirl of dust on the red planet as the rover approaches and the "sky crane" maneuver that helps land rovers on the surface of Mars.

During the famed sky crane maneuver, nylon cords lowered the rover 25 feet below the descent stage. After the rover touched down on the Martian surface, the cords detached and the descent stage flew away and landed at a safe distance.

"We put the EDL camera system onto the spacecraft not only for the opportunity to gain a better understanding of our spacecraft's performance during entry, descent, and landing, but also because we wanted to take the public along for the ride of a lifetime — landing on the surface of Mars," said Dave Gruel, lead engineer for Mars 2020 Perseverance's EDL camera and microphone subsystem at JPL, in a statement.

"We know the public is fascinated with Mars exploration, so we added the EDL Cam microphone to the vehicle because we hoped it could enhance the experience, especially for visually-impaired space fans, and engage and inspire people around the world."

The video ends with Perseverance's wheels literally landing on Mars and the descent stage flying off to a safe distance away.

"If this were an old Western movie, I'd say the descent stage was our hero riding slowly into the setting Sun, but the heroes are actually back here on Earth," said Matt Wallace, Mars 2020 Perseverance deputy project manager at JPL, in a statement. "I've been waiting 25 years for the opportunity to see a spacecraft land on Mars. It was worth the wait. Being able to share this with the world is a great moment for our team."

Cameras on the back shell, descent stage and several on the rover itself captured these different perspectives throughout landing.

An image captured by the Mars Reconnaissance Orbiter, which has been circling Mars since 2006, shows where the rover and its components landed on the red planet.

The mission team is going through checkouts with the rover and its helicopter to ensure that all of the components, including its science instruments, are functioning. The rover will also capture its first weather report using its Mars Environmental Dynamics Analyzer instrument.

The mission scientists are analyzing images sent back by the rover to determine Perseverance's path once it begins to explore.

"We're just beginning to do amazing things on the surface of Mars," Gruel said.

The mysterious origin of the northern lights has been proven

The aurora borealis, or northern lights, could easily be described as Earth's greatest light show. The theory of how the aurora is created has been speculated but never proven, until now.

A new species of dinosaur discovered in Australia has been confirmed as the largest ever found in the country, and one of the biggest in the world.

A giant star is blinking near the center of our Milky Way galaxy like a stellar beacon, according to new observations by astronomers.

This composite image made available by NASA, produced from photos captured Feb. 20, 2021 by the Perseverance Mars rover, shows the surface of Mars. It landed on Thursday, Feb. 18. 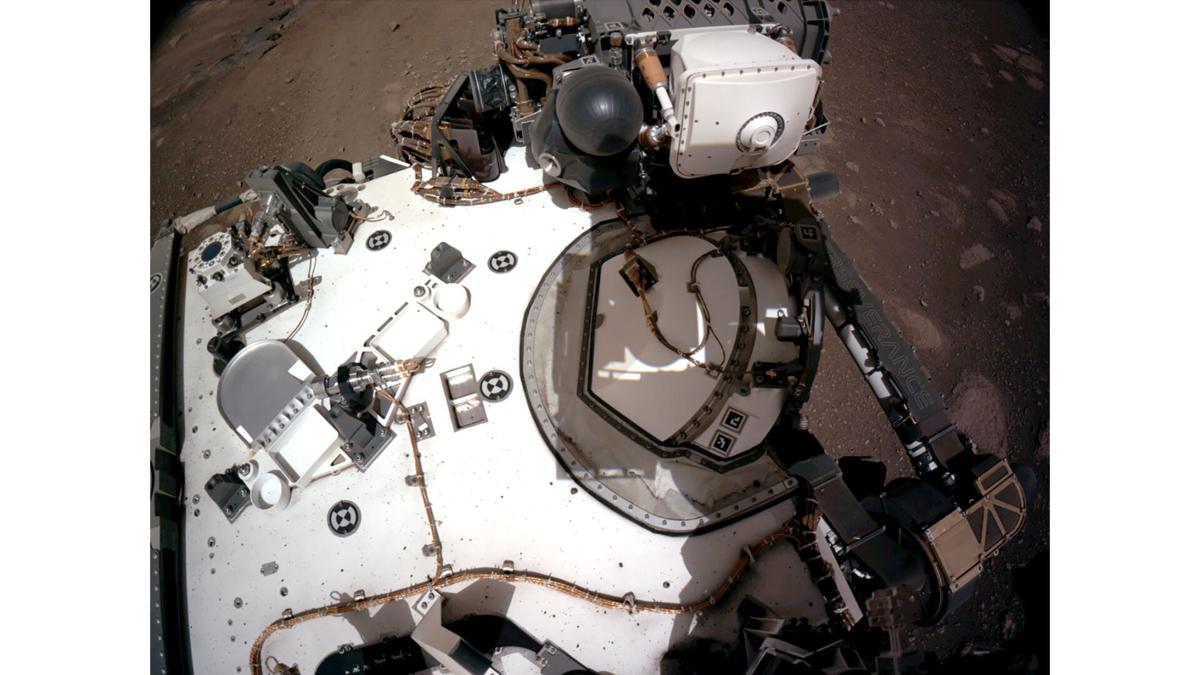 The navigation cameras on the rover captured this view of the rover's deck on Feb. 20. 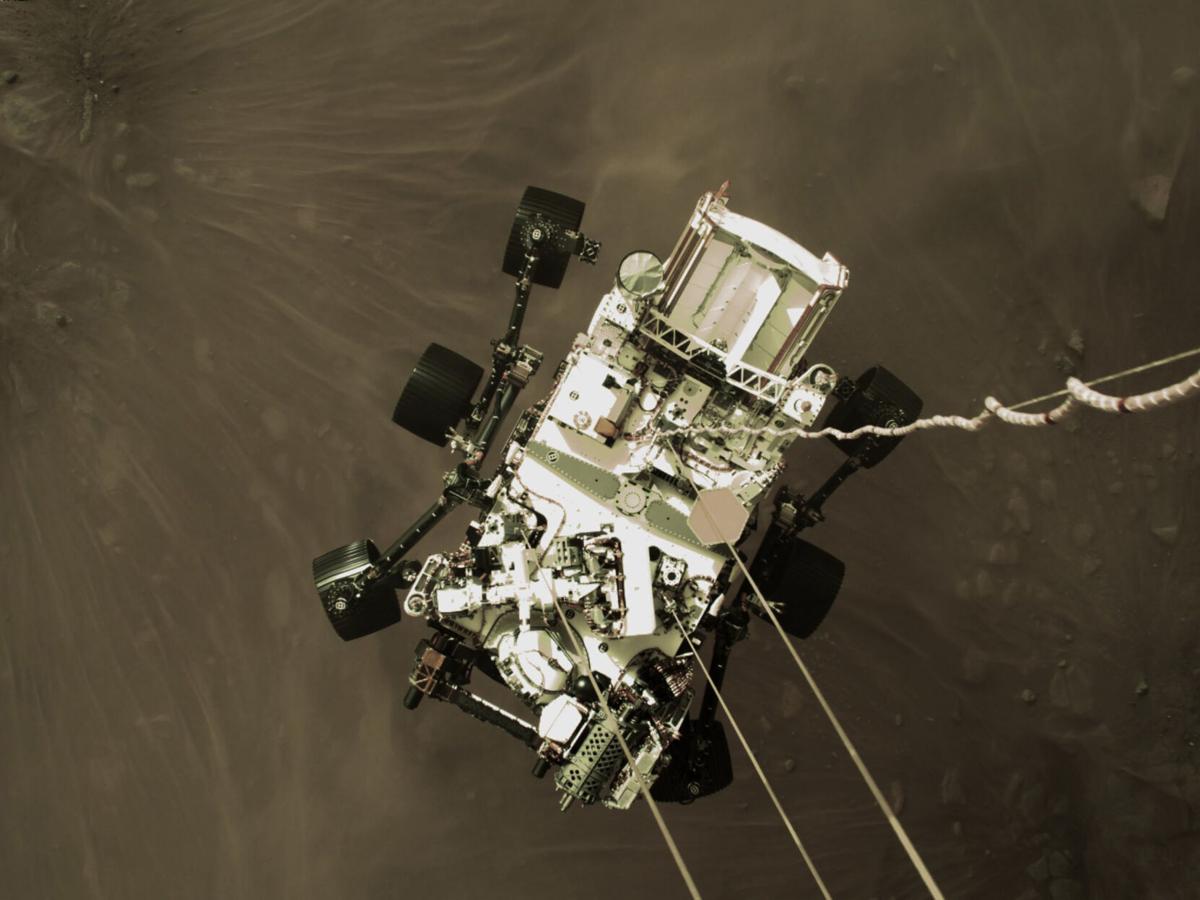 Cameras on "Percy," as the rover is affectionately called at mission control, show for the first time the perspective of a spacecraft landing on Mars. This shot from a camera on Perseverance's "jetpack" captures the rover in mid-air, just before its wheels touched down. 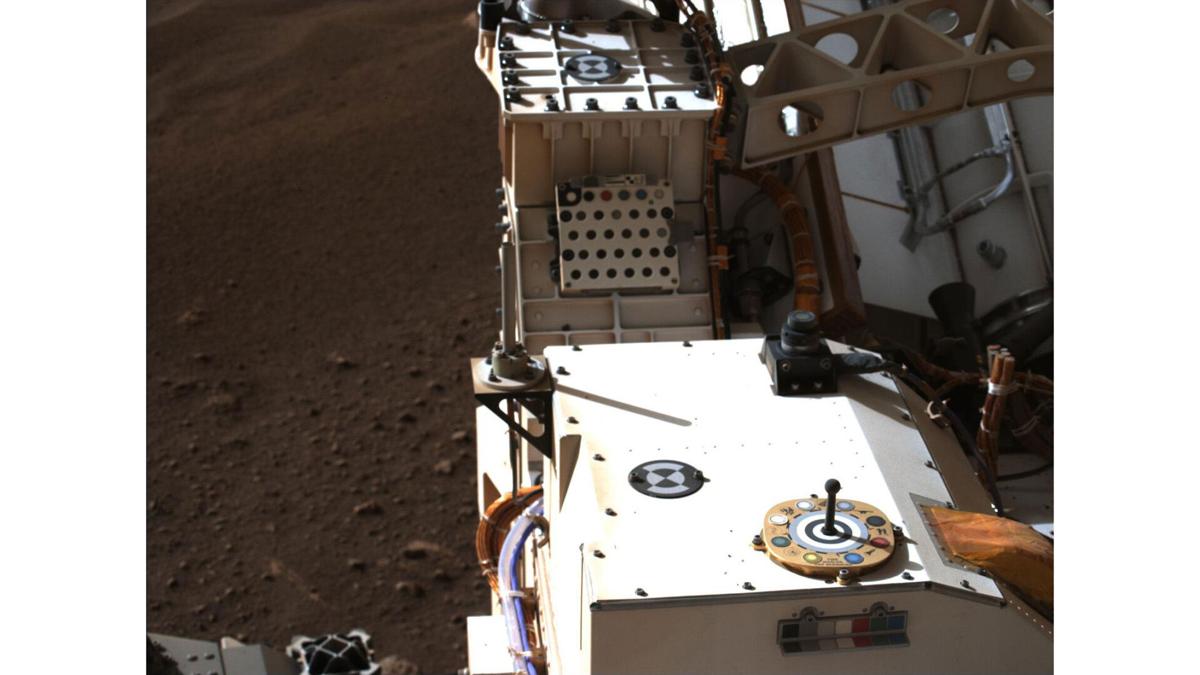 Mastcam-Z, a pair of zoomable cameras aboard the rover, captured this image looking at its calibration target. 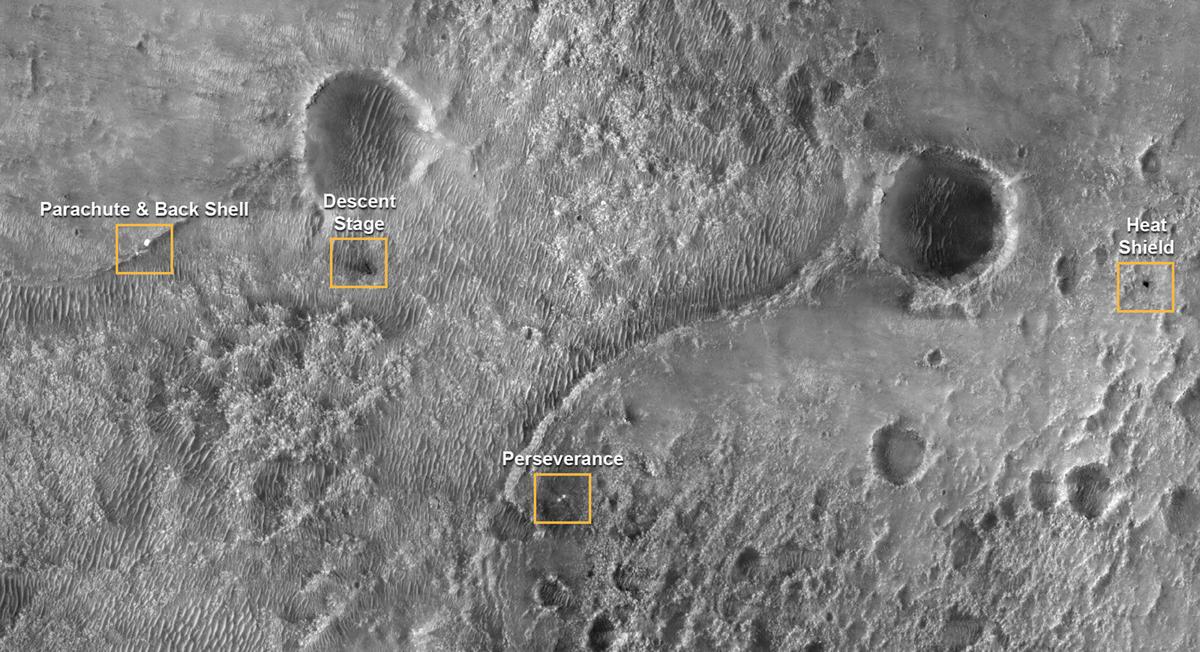 This orbiter image shows the many parts of the Mars 2020 mission landing system that got the rover safely on the ground.