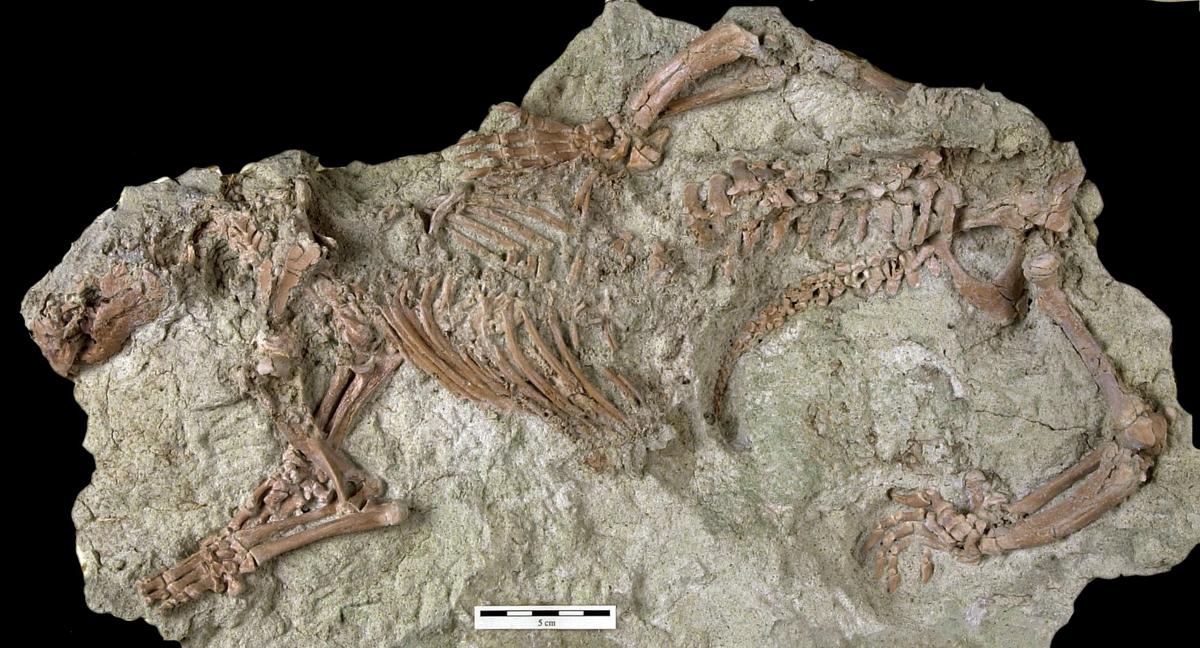 This is the well preserved skeleton of Adalatherium hui, a gondwanatherian mammal that lived on Madagascar 66 million years ago. 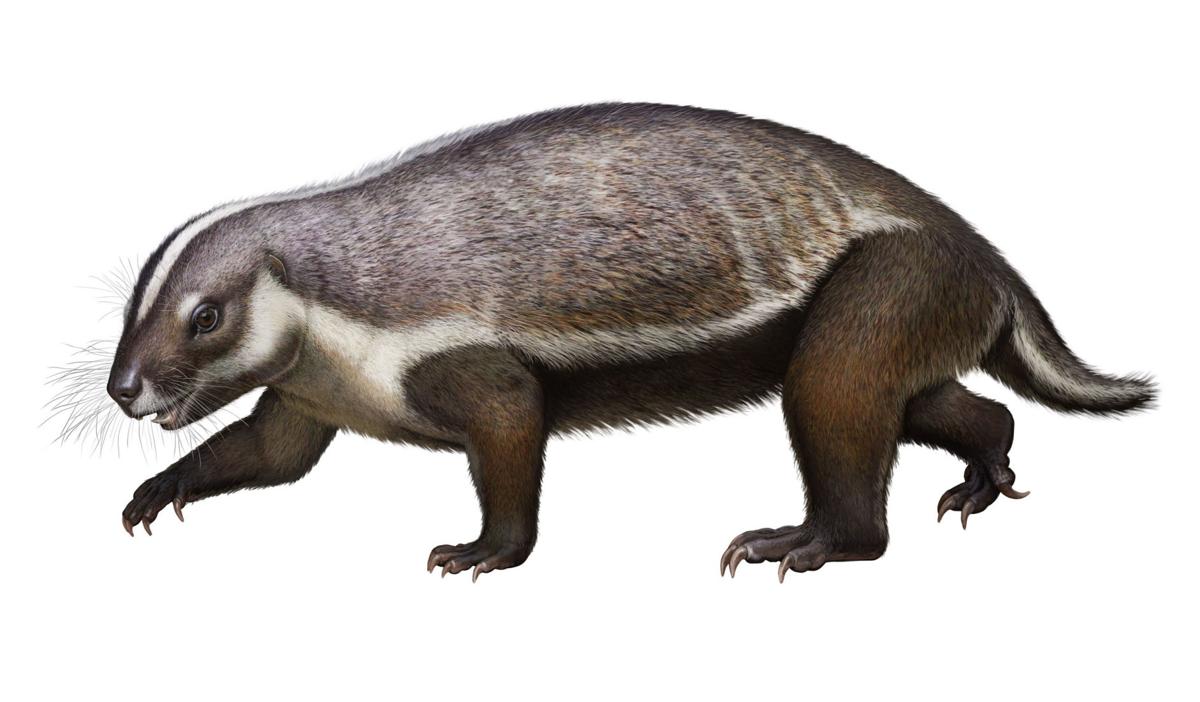 This is an artist rendering of Adalatherium hui, a gondwanatherian mammal from the Late Cretaceous period of Madagascar. It looks a bit like a badger. 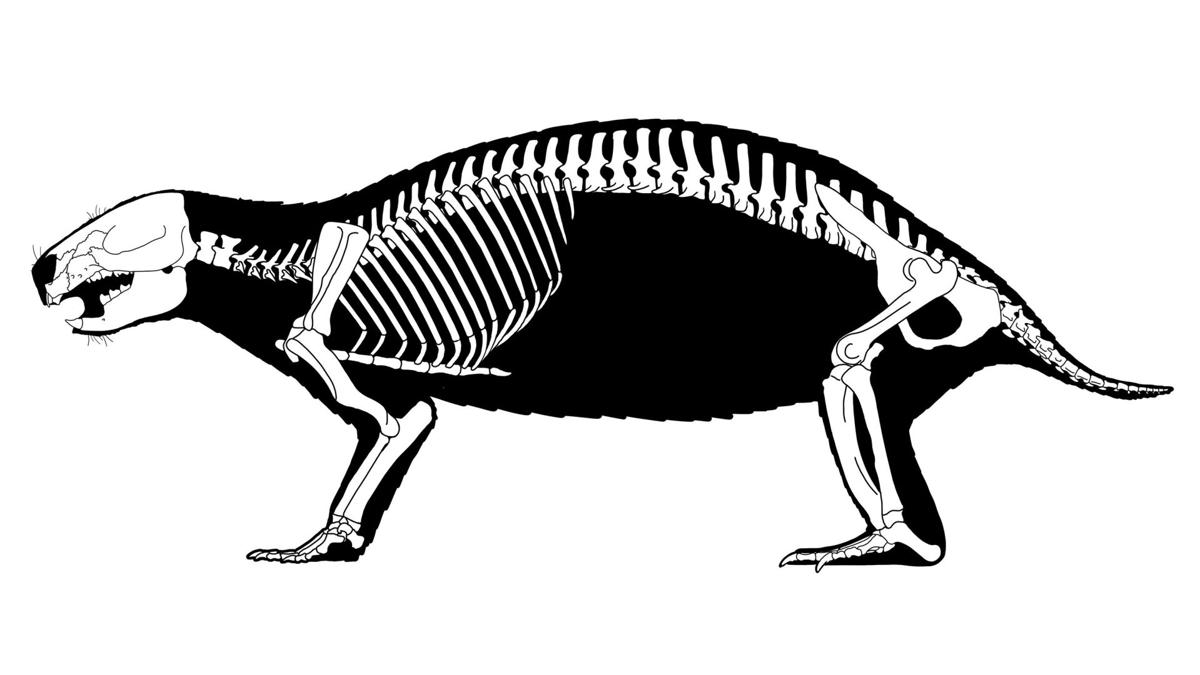 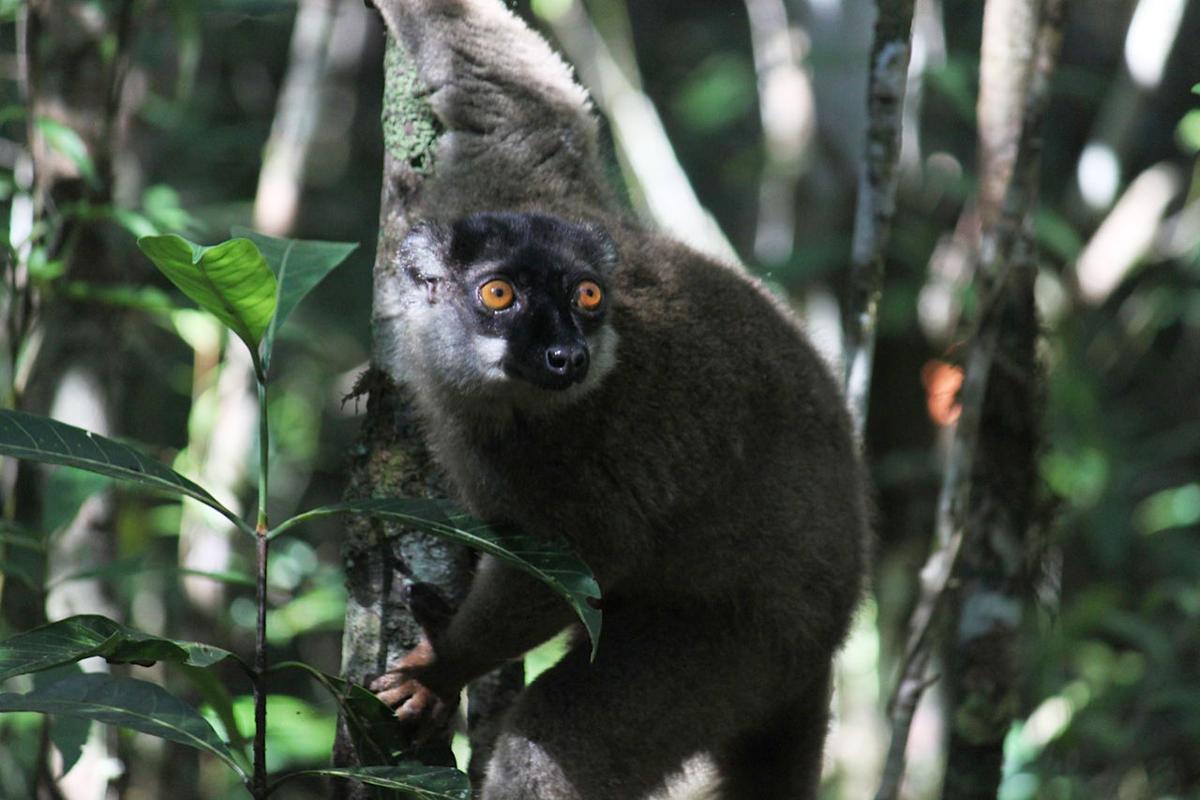 A lemur looks through the forest at Andasibe-Mantadia National Park in Andasibe, Madagascar, in December 2011. The East African island nation is the only place in the world to see lemurs in the wild. The island population began anew with native species like lemurs after strange animals like Adalatherium disappeared about 66 million years ago.

Researchers have uncovered the fossil of an early mammal named the "crazy beast" that lived 66 million years ago on Madagascar, and it's unlike any mammal ever known, living or extinct.

This mammal, about the size of an opossum, had a mix of strange characteristics that haven't been seen together before. It highlights evolutionary strangeness that can arise from evolution when it occurs in isolation on islands like Madagascar, which is home to other species, living and extinct, found nowhere else in the world.

The mammal is the most complete and well preserved skeleton of a gondwanatherian, which is a mammal that lived on the ancient southern supercontinent Gondwana, which is now the continents of the southern hemisphere.

Fossils from the Mesozoic era, between 65 million and 252 million years ago, are sparse from Gondwana, largely including items such as a single skull, bits of jaw bone and teeth.

But this mammal, which looks a bit like a badger in the artist rendering based on the skeleton, is so well preserved that it includes cartilaginous tissue, small bones and the creature's short tail.

The researchers named it Adalatherium hui, a hybrid name that combines the Malagasy word for "crazy" and the Greek word for "beast." Hui is a nod to the late Yaoming Hu, a study co-author at Stony Brook University.

They believe this particular creature was a juvenile, weighing around seven pounds. But compared to the other Gondwana mammals living at the time, which were the size of mice, it was quite large. And it lived among dinosaurs and ancient crocodiles before the asteroid impact wiped them all out 66 million years ago at the end of the Cretaceous period.

It was also incredibly weird.

"Knowing what we know about the skeletal anatomy of all living and extinct mammals, it is difficult to imagine that a mammal like Adalatherium could have evolved; it bends and even breaks a lot of rules," said David Krause, lead study author, senior curator of vertebrate paleontology at the Denver Museum of Nature & Science and professor emeritus at Stony Brook University.

The study was published Wednesday in the journal Nature.

The skeleton contains a number of strange features that researchers can't quite figure out.

For instance, Adalatherium had more holes on its face than any known mammal, Krause said in a press call. These holes, called foramina, created pathways for blood vessels and nerves, leading to an incredibly sensitive snout that was covered in whiskers. It also had a large hole at the top of the snout that can't be compared to any known mammal that ever lived or is currently living.

Its teeth can't be compared with anything else either. They're structured in a strange way that can't be explained. Krause said its back teeth "are from outer space."

The animal's backbone contained more vertebrae than any known mammal from the Mesozoic era. And it must have walked in a strange way because the front half of the animal doesn't match the back half. And one of its back legs was bowed.

The forearms and shoulders can be compared to cats and dogs, meaning they were placed under the body — very unusual for early mammals that walked more like reptiles, said Simone Hoffmann, study co-author and assistant professor at the New York Institute of Technology's department of anthropology.

But the hind legs are the opposite pattern, suggesting that the legs spread out and had more sprawling knee joints like reptiles. Two patterns in one animal means that it walked very differently than anything living today, Hoffman said. But scientists believe it was capable of running, in addition to other ways of moving.

Adalatherium also had strong, long claws on its back legs, suggesting that it dug using its hind legs.

"Adalatherium is the oddest of oddballs," Hoffmann said. "Trying to figure out how it moved is nearly impossible because, for instance, its front end is telling us a different story than its back end."

Weird island animals and where to find them

Krause and his colleagues have been investigating fossils that belonged to unusual animals living on ancient Madagascar for 25 years. This fossil was found in 1999 at the site of a sedimentary basin in northwest Madagascar. But it was investigated recently.

Multiple expeditions to that basin have revealed the bones of dinosaurs and other vertebrates, or backboned animals, well preserved and buried by the ancient flow of debris in the basin. But they had to collect thousands of specimens just to find a handful of mammal fossils, Krause said.

In 2010, they found the skull of a gondwanatherian. Before that, discoveries of them were largely restricted to teeth and jaw fragments.

Fossils of gondwanatherian fossils were first found in Argentina, followed by discoveries in Africa, India, the Antarctic Peninsula, and Madagascar. At first, researchers believed they were related to sloths, anteaters and armadillos. But they stand on their own, unrelated to anything alive today, "now known to have been part of a grand evolutionary experiment, doing their own thing, an experiment that failed and was snuffed out in the Eocene (Epoch), about 45 million years ago," Krause said.

If the "crazy beast" can be related to anything, it's multituberculates, a group of extinct rodent-like mammals that lived on the northern continents, according to the researchers.

The researchers chalk it up to evolving in the isolated environment of an island. And Madagascar has been an island for a long time. It separated from the Indian subcontinent 88 million years ago and has been on its own ever since.

This allowed animals and dinosaurs on Madagascar like Adalatherium "ample time to develop its many ludicrous features," Krause said.

Krause's team has found a number of other strange fossils on Madagascar, including a giant, armored, predatory frog called Beelzebufo, a short-snouted herbivorous crocodile called Simosuchus and a buck-toothed dinosaur called Masiakasaurus.

"Madagascar is a pretty weird place," Krause said. "Plants and animals there are not known anywhere else in the world. Evolution on islands leads to that in some sense."

When animals evolve in isolated areas, like islands, they deal with competition, predators and sources of food. This causes them to evolve into species that don't resemble mainland animals, including unusual shapes and sizes.

Researchers call it the "island rule": Small animals increase in size, a form of gigantism, while large mammals decrease in size.

Adalatherium likely disappeared along with the rest of the strange animals on Madagascar 66 million years ago, before the island population began anew with native species like lemurs. But the discovery sheds light on the fascinating mammals that came before the ones we know today. And only more research and discovery will fill in the remaining gaps.

"Adalatherium is just one piece, but an important piece, in a very large puzzle on early mammalian evolution in the southern hemisphere," Krause noted. "Unfortunately, most of the pieces are still missing."

Some things to know today that aren't related to the coronavirus pandemic.

Researchers say two species of fish roamed the seas about 40 to 45 million years ago with fangs and a single saber tooth. Their closest living relatives? Anchovies.

How the world's most dangerous bird got its unique feathers

With its black iridescent feathered body, its blue, turquoise and magenta neck and horned crest or casque, the cassowary has been described as looking like a "high-fashion dinosaur."