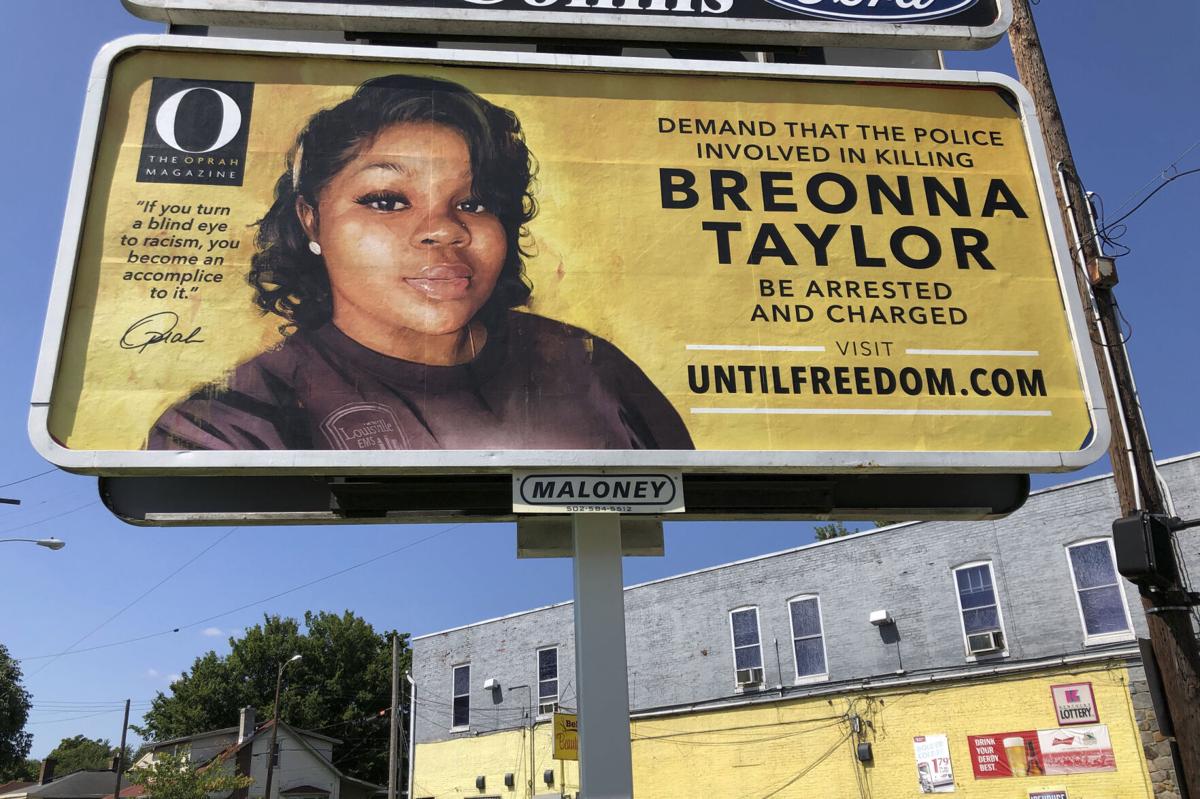 A billboard sponsored by O, The Oprah Magazine, is on display with a photo of Breonna Taylor in Louisville, Ky. Twenty-six billboards are going up across Louisville, demanding that the police officers involved in Taylor's death be arrested and charged. (AP Photo/Dylan T. Lovan) 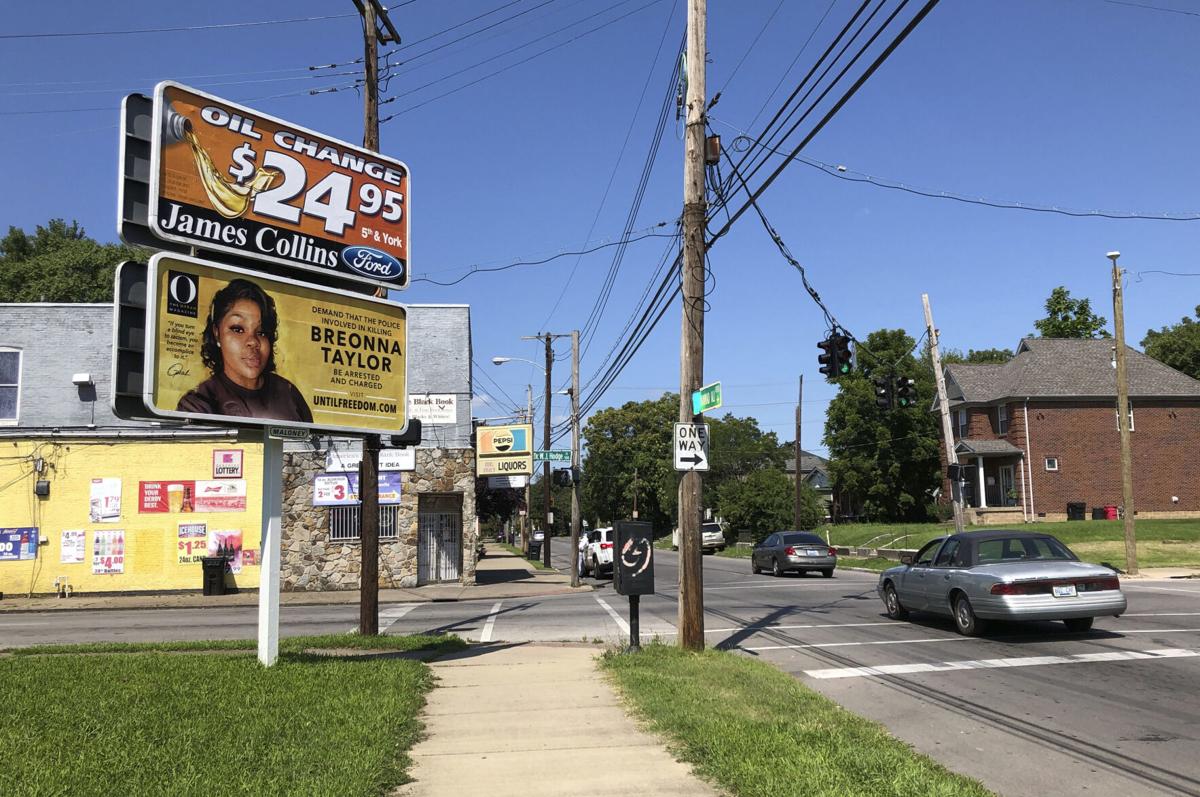 This is one of 26 billboards sponsored by O, The Oprah Magazine, in Louisville, Ky., demanding that the police officers involved in Breonna Taylor's death be arrested and charged. Taylor was shot multiple times March 13 when police officers burst into her Louisville apartment using a no-knock warrant during a narcotics investigation. No drugs were found. (AP Photo/Dylan T. Lovan) 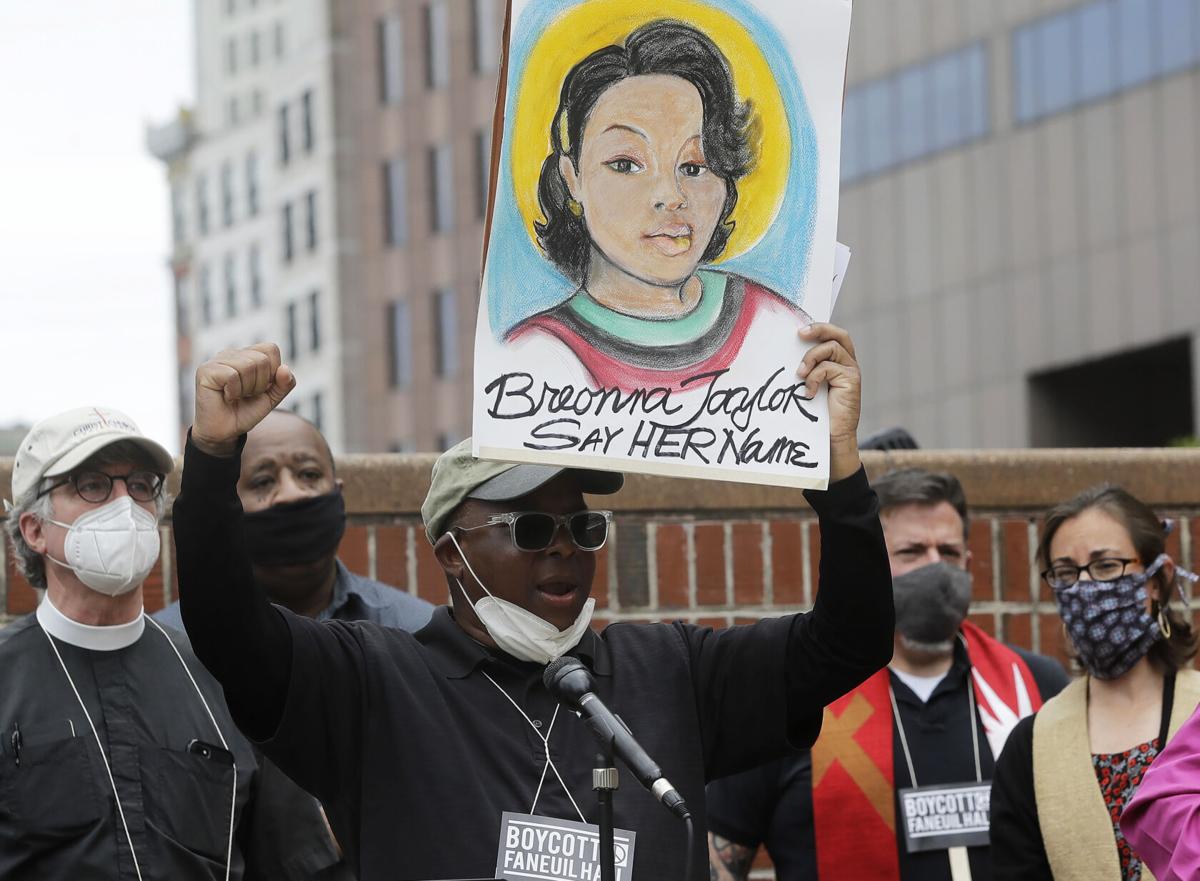 In this June 9, 2020, file photo, Kevin Peterson, center, founder and executive director of the New Democracy Coalition, displays a placard showing Breonna Taylor as he addresses a rally in Boston. (AP Photo/Steven Senne)

LOUISVILLE, Ky. — First, Oprah Winfrey put Breonna Taylor on the cover of O, The Oprah Magazine. Now the media mogul is spreading her message with billboards demanding justice for the Kentucky woman shot to death during a police raid.

Twenty-six billboards displaying a portrait of Taylor are going up across Louisville, Kentucky, demanding that the police officers involved in her death be arrested and charged, according to social justice organization Until Freedom. That's one billboard for every year of the Black woman's life.

The billboards, funded by the magazine, showcase the magazine cover dedicated to Taylor, the Courier Journal reported. Also displayed is a quote from Winfrey: "If you turn a blind eye to racism, you become an accomplice to it."

Until Freedom thanked the Oprah magazine for its work on the billboards.

"Together, we will make sure no one forgets #BreonnaTaylor's name and recommit to the fight for justice for her and her family," the group said in a tweet.

26 billboards - for every year of life of #BreonnaTaylor erected in Louisville, KY.

Kentucky will not forget her name. We will get justice for Breonna. pic.twitter.com/rOM2bhVdAy

Taylor, an emergency medical tech studying to become a nurse, was shot multiple times March 13 when police officers burst into her Louisville apartment using a no-knock warrant during a narcotics investigation. The warrant to search her home was in connection with a suspect who did not live there, and no drugs were found.

Kenneth Walker, Taylor's boyfriend, was originally charged with attempted murder after he fired a shot at one of the officers who came into the home. Walker has said he didn't know who was entering the apartment and was firing a warning shot. The charge was later dropped.

Global protests on behalf of Taylor, George Floyd in Minnesota and others have been part of a national reckoning over racism and police brutality. Tensions have swelled in Taylor's hometown and beyond as activists, professional athletes and social media stars push for action while investigators plead for more patience.

The decision whether to bring state-level criminal charges against the Louisville officers rests with Kentucky Attorney General Daniel Cameron. He took the Taylor case after a local prosecutor recused himself from reviewing the matter. One of the officers has been terminated and two other officers are on administrative reassignment.

Cameron, the first African American elected to the attorney general's job in Kentucky, has declined to put a timetable on his decision since taking over the case in May.

"We remain committed to an independent and thorough investigation into the death of Ms. Breonna Taylor," Cameron said Friday on his official Twitter account.

"The investigation remains ongoing, and we currently await additional testing and analysis from federal partners, including a ballistics test from the FBI crime lab," the tweet said.

The FBI field office in Louisville said Friday that a "significant amount of ballistic evidence" was collected when investigators returned to Taylor's apartment in June.

Christopher 2X, an anti-violence activist in Louisville, told reporters this week that he's encouraged by the commitment that FBI officials locally and nationally have shown to the case. He commented after participating in a meeting at the FBI's Louisville office.

Virus spikes have officials looking to shore up hospitals